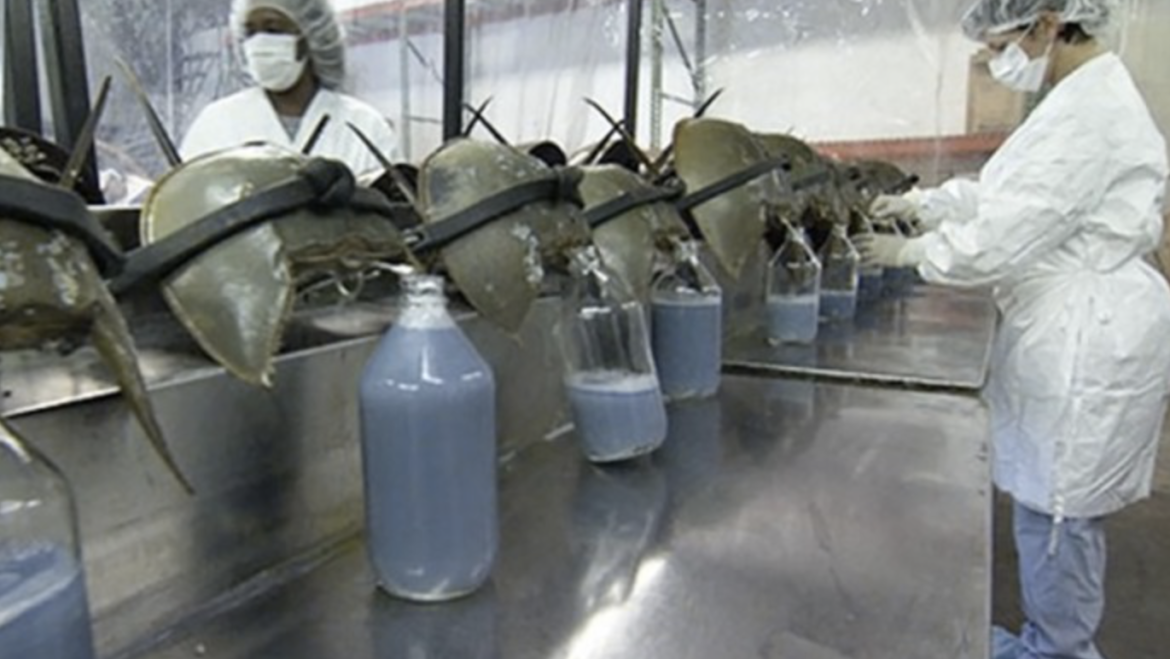 An interesting article concerning the plight of the horseshoe crab was published in The Atlantic newspaper recently. Although harvesting the blood of horseshoe crabs can have negative effects on the horseshoe crab population, the biomedical need for their blood gives value to their species. Once a synthetic replacement for their copper-based blood has been placed into play, the horseshoe crab population could be, once again, considered simply bait. It’s crucial to the survival of horseshoe crabs that people become familiar with them, & recognize them as the harmless, fascinating sea animals that they are. If horseshoe crabs become popular and beloved as whales have become, people will begin to care for them & want to protect them. This is what motivated me to write The Bumpy, Lumpy Horseshoe Crab, about one of the most endearing marine creatures that lives at the edge of the sea.

Read the article below or click here to read from its source, The Atlantic:

Each year, half a million horseshoe crabs are captured and bled alive to create an unparalleled biomedical technology.Alexis C. Madrigal
Feb 26, 2014

The thing about the blood that everyone notices first: It’s blue, baby blue.

The marvelous thing about horseshoe crab blood, though, isn’t the color. It’s a chemical found only in the amoebocytes of its blood cells that can detect mere traces of bacterial presence and trap them in inescapable clots.

To take advantage of this biological idiosyncrasy, pharmaceutical companies burst the cells that contain the chemical, called coagulogen. Then, they can use the coagulogen to detect contamination in any solution that might come into contact with blood. If there are dangerous bacterial endotoxins in the liquid—even at a concentration of one part per trillion—the horseshoe crab blood extract will go to work, turning the solution into what scientist Fred Bang, who co-discovered the substance, called a “gel.”

“This gel immobilized the bacteria but did not kill them,” Bang wrote in the 1956 paper announcing the substance. “The gel or clot was stable and tough and remained so for several weeks at room temperature.”

If there is no bacterial contamination, then the coagulation does not occur, and the solution can be considered free of bacteria. It’s a simple, nearly instantaneous test that goes by the name of the LAL, or Limulus amebocyte lysate, test (after the species name of the crab, Limulus polyphemus).

The LAL testreplaced the rather horrifying prospect of possibly contaminated substances being tested on “large colonies of rabbits.” Pharma companies didn’t like the rabbit process, either, because it was slow and expensive.

So, now, the horseshoe blood test is a big business. “Every drug certified by the FDA must be tested using LAL,” PBS’s Nature documentary noted, “as do surgical implants such as pacemakers and prosthetic devices.”

I don’t know about you, but the idea that every single person in America who has ever had an injection has been protected because we harvest the blood of a forgettable sea creature with a hidden chemical superpower makes me feel a little bit crazy. This scenario is not even sci-fi, it’s postmodern technology.

The only problem is that the companies need a large supply of the blood of live crabs. Horseshoe crabs live on the seafloor, near the shore. When they want to mate, they swim into very shallow water, and horseshoe crab collectors wade along, snatching the crabs out of their habitat.

The biomedical collectors are not the first to make use of the crabs’ bodies. As far back as colonial times, “cancerine fertilizer” was used to enrich fields. In the 20th century, though, this became an organized industry around the Delaware Bay. The crabs were steamed and then ground into meal for the fields. Others were fed to hogs. Millions of crabs were harvested.

As we slowly killed off the horseshoe crab population, by the 1970s, the fertilizer industry declined and had died off. But harvests picked back up in the 1990s, when fishermen realized they could use the crabs as bait for catching large snails called whelk (aka conchs).

That is to say, these animals have not been treated kindly by humans. They don’t inspire the kind of affection we have for, say, bunny rabbits. In the eyes of people before Fred Bang, the only merit attached to the horseshoe crab was its proximity. They like the shoreline, as do we.

And that bacteria-rich habitat is why, Bang speculated, the crabs evolved their marvelous chemical defense. Their circulatory systems work more like a spider’s than like ours. If we inhale something bad, that thing has to find its way through our bodies and into our bloodstreams, fighting its way through our white blood cells along the way. But if bacteria find their way under a horseshoe crab’s exoskeleton, they can roam free to do damage.

“Large sinuses exist that allow blood direct contact with tissues,” the Woods Hole Marine Biological Laboratory’s history of the crab explains. “There are many wide open spaces and bacteria entering a crack in the shell of a horseshoe crab have easy access to large internal areas of the crab, a potentially deadly scenario.”

The coagulogen changes the wide-open terrain of the horseshoe crab’s circulatory system. When the crab blood cells sense invaders, they release granules of the chemical, which becomes a gooey physical barrier to the movement of the bacteria, preventing the spread of infection. The best metaphor might be the superpower of the X-Men’s Iceman, but instead of using cold to encase enemies, the horseshoe crab instead uses its remarkable chemistry.

This trick, perhaps unfortunately for the horseshoe crab, does not work on humans.

After the biomedical horseshoe crab collectors get them back to a lab, they pierce the tissue around the animals’ hearts and drain up to 30 percent of the animals’ blood. The LAL is extracted from the blood, and can go for $15,000 per quart. Only five companies bleed the crabs: Associates of Cape Cod, Lonza, Wako Chemicals, Charles River Endosafe, and Limuli Labs (which does not have a website).

The horseshoe crabs are returned to the ocean a great distance from where they were initially picked up to avoid rebleeding animals. The whole process takes between 24 and 72 hours.

The industry says that not that many of the animals die. Between 10 and 30 percent of the bled animals, according to varying estimates, actually die. We can imagine that it’s like us giving blood. The crabs get some apple juice and animal crackers and are fine soon thereafter.

But some people have noticed problems. In the regions where horseshoe crabs are harvested in large numbers for biomedical purposes—like Pleasant Bay, Massachusetts—fewer and fewer females are showing up to spawn. Perhaps the bleeding was, to use a technical term, messing them up, even if it wasn’t killing them.

Researchers at the University of New Hampshire and Plymouth State University decided to test this hypothesis. They attached accelerometers to female horseshoe crabs that had been bled for our benefit.

They reported their results in a new paper in The Biological Bulletin, “Sublethal Behavioral and Physiological Effects of the Biomedical Bleeding Process on the American Horseshoe Crab, Limulus polyphemus.“

The bleeding process appears to make the bled animals more lethargic, slower, and less likely to follow the tides like their counterparts do.

“The changes we observed in activity levels, movement velocity, and expression of tidal rhythms may interfere with daily L. polyphemus activities, which would be particularly pronounced during the spawning season,” they write. “Spawning necessitates several energetically costly trips to the intertidal zone larger females tend to make more excursions to the intertidal zone, often making multiple trips within the same week. An activity deficit, such as that caused by biomedical bleeding, may influence either the number of those trips or their timing. In the case of the latter, females may delay spawning activity while they are recuperating, and this could reduce their spawning output.”

In short: Bleeding a female horseshoe crab may make it less likely to mate, even if it doesn’t kill it. (Only 18 percent of the crabs the authors tracked died.)

While the bleeding process is clearly better for the crabs than the outright harvesting that used to occur, the study shows that there’s no such thing as free horseshoe crab blood.

The logical question to ask is: Why hasn’t a synthetic substitute for LAL been developed? After all, it’s not like we still get insulin for diabetics from pigs. We use yeast to produce it using the DNA sequence that codes for the protein.

It turns out: Companies are researching this solution. They don’t want the precursor of their product to be regulated by a Fishery Management Plan, if they can avoid it.

In particular, biologist Ding Jeak Ling from the National University of Singapore succeeded in producing the key bacterial detection enzyme, known as Factor C, in yeast. She licensed the process to Lonza, which has brought it to market as a product called PyroGene. A German company named Hyglos has been working on another synthetic endotoxin detector, too. Other, even more advanced technologies are on the way, too.

So, good news for the horseshoe crab! It’s like when we struck crude oil and sperm whales celebrated (at least in the imagination of a Vanity Fair cartoonist).

The cosmic joke might be that horseshoe crabs, which for the past 30 years have been a high-value part of the new biotech economy, will return to their previous status as fishermen’s bait for predatory snails. Being valuable alive has obviously hurt the horseshoe crab in some ways. But having no economic value at all is worse.

Horseshoe crabs are an ancient animal, more than half a billion years old. They have their own ways of doing things, a fact we’ve been exploiting for decades. Their blue blood? That’s because copper plays the role in the crabs’ blood that iron does in ours. The iron-based, oxygen-carrying hemoglobin molecules in our blood give it that red color; the copper-based, oxygen-carrying hemocyanin molecules in theirs make it baby blue.

Our own species evolved a thousand times more recently, coming into our current anatomical form a couple hundred thousand years ago. Let’s hope we don’t wipe horseshoe crabs out after we finish cloning their ancient chemical wisdom.