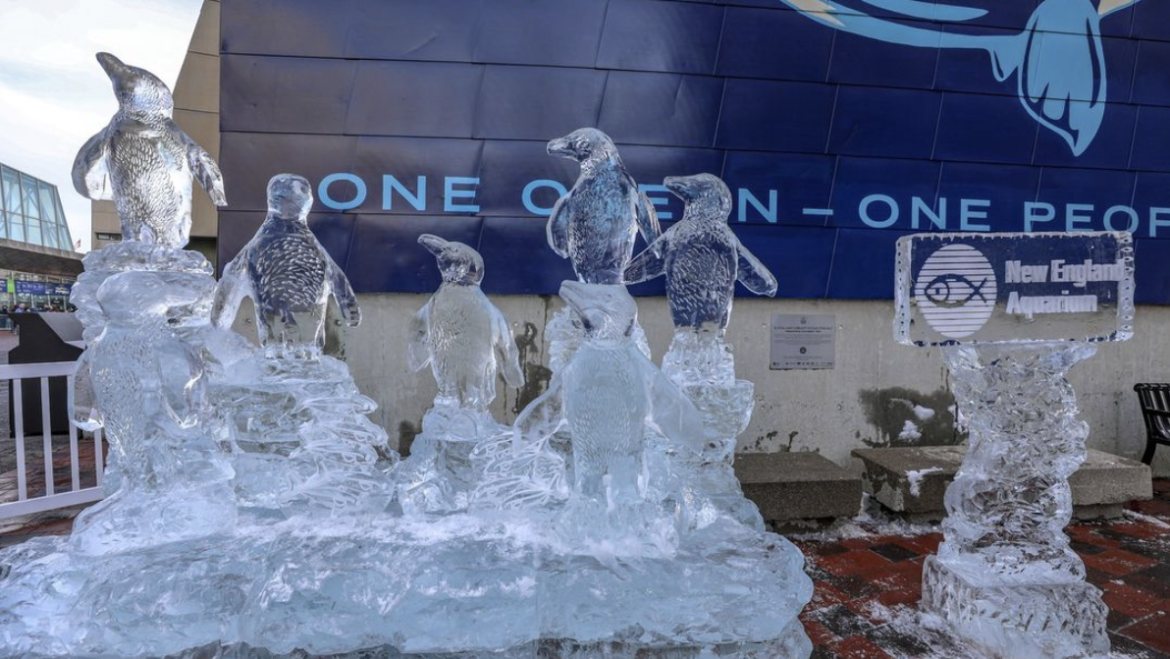 It was a warm, light rain that greeted visitors to the Boston Waterfront Ice Sculpture Stroll this New Year’s Eve, where the New England Aquarium’s annual sculpture is always a highlight. This year’s pick was chosen to bring attention to the African penguins, which are endangered in the wild. By highlighting this particular aquatic animal, the aquarium hopes to spark a conversation which will lead to visitors wanting to learn more and perhaps become interested in the conservation of this beloved species included in the aquarium’s sea animal family.

African penguins can be found living in the wild on the southwestern African coast, and are known for making sounds that are a lot like a donkey’s bray. They live for ten to fifteen years in the wild, but in captivity they can live to be much older. The New England Aquarium actually has an African penguin who is 41 years young!

The center penguin in the ice sculpture is modeled after a twenty-four year old female penguin named “Beach Donkey,” who is part of a live penguin exhibit at the New England Aquarium. She has developed a malady called pododermatitis, which causes calluses on the bottom of Beach Donkey’s feet. Because of this, she has specially made Tevas that she wears on her feet to make her more comfortable while walking around. To learn more about Beach Donkey, click on the New England Aquarium video below.

Hopefully, people got a good look at this beautiful ice sculpture created by Don Chapelle of Brilliant Ice Sculpture early. The 10,800 pounds of ice doesn’t stand much of a chance, once revealed, against the mid-fifty degree weather and light rain. Chapelle’s team used dry ice and a tarp to protect the sculpture before the first night celebration. But once revealed, the race is on! With all ice sculptures, the first thing that’s lost is the tremendous detail that Chapelle includes in each of his sculptures. Luckily, we have photos to preserve it’s memory.