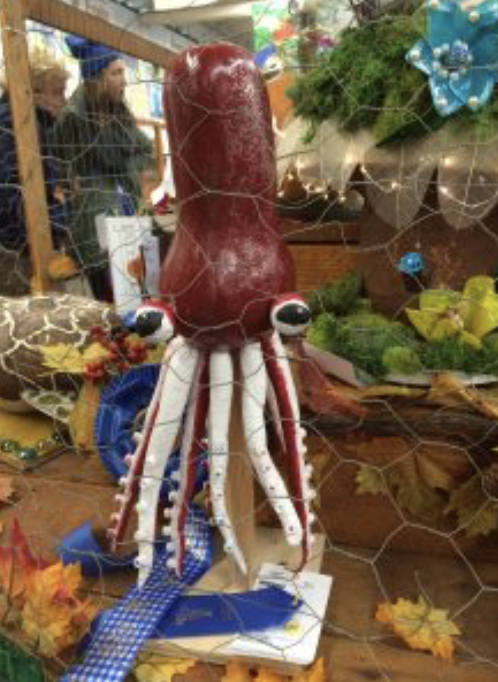 A Clever Vegetable Octopus Exhibited at the Topsfield Fair

This first prize winning creation built by the Kraus family is on exhibit at the Topsfield Fair, the oldest agricultural fair in the country. It’s the perfect blend of the farm and the sea, two of my passions.

This “octopus” has an eggplant body, two radish eyes, and carrots for tentacles. It could have been painted virtually any color, since the octopus is a master of camouflage, changing both the color and texture of their bodies to coordinate with their surroundings. With fall colors, and fruits and vegetables all around it, this octopus blends perfectly with its environment!

An octopus has two eyes that are remarkably very similar to human eyes. Each eye has a retina, a cornea, an iris, and a lens. Unlike humans, an octopus has the ability to rotate its eyes which eliminates blind spots. Although an octopus has great vision, it only sees really well up to about eight feet away.

This vegetable octopus will be on display at the Topsfield Fair until Columbus Day. If you’re in the area, be sure to check it out. If not, you can build your own octopus with one quick trip to your local farm stand. Happy Fall!